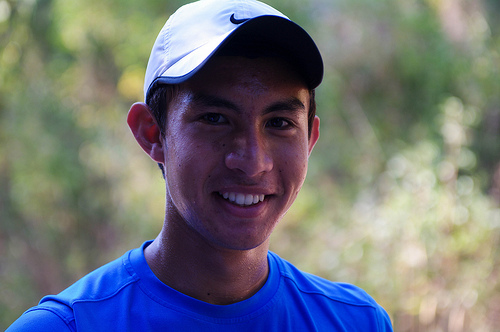 Coach’s Corner – James started off the 2013 and 2014 season by teaming with Andrew La Cava to make it to the fall ITA National Championship finals and start the year off ranked #2 in the nation. Unfortunately for James he suffered a serious shoulder injury during the 2012-2013 and only played a couple matches at the end of the year. However one of those matches a straight set win over Texas Tyler at the NCAA D3 team tournament. 2014 looks to be a great year for James as he his healthy and playing great tennis.

This Hawaiian certainly knows how to make a splash. In the first tournament of his young college career, James defeated the #3 seed (and 1st team all-conference) 6-0, 6-1! James continued his strong play defeating teammate Adriel Borshansky 7-5, 7-5 before losing in the quarters to teammate Jeff Tolman. In doubles James teamed with Whitman junior Sam Sadeghi to knock off several seeds before losing in the semi’s to teammates Jeff Tolman/Andrew La Cava.

James possesses a well rounded game – he’s comfortable staying in the back court grinding out points and yet is strong at the net. Plus he loves to play doubles (and is a hell of a doubles player)! As a coach I love players that are not only strong singles players but also impact double players!

James is incredibly pleasant to be around. Along with freshman teammate Colton, these two are going to do great things for our tennis family.