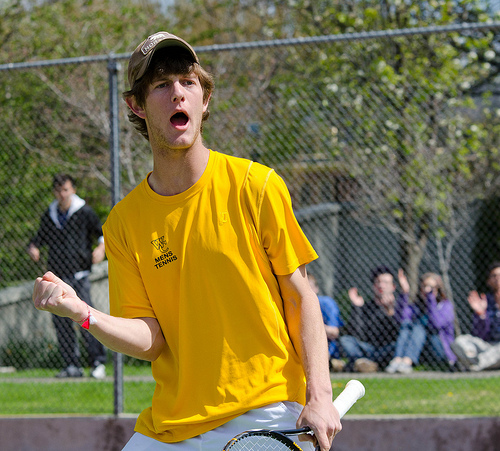 Coach’s Corner – Jeff has played some of the best matches and hit some of the best shots I have seen while at Whitman. In fact a couple of the shots he hit against an opposing team are still brought up to me by that coach. Jeff has the ability to play incredibly high level tennis. For example during our 2011 spring break trip Jeff slotted wins against three top 12 teams during a 3 day span!

Jeff possesses a ton of racket head speed and can really unload on the ball. Because of his remarkable timing he is a key  figure in our doubles line-up. Last year he teamed up with Etienne Moshevich to produce a nearly flawless season.

In the fall ITA tournament, Jeff advanced to the finals of doubles (with partner Andrew) and the semi’s of singles (losing to teammate Conor). If Jeff gets on a roll this season the 2012 could be a banner year for the Whitties.

Sophomore season (2010-11) – Scored clinching fifth team — for second straight season — as Whitman captured automatic berth in NCAA Division III national championship field with 5-0 victory over Willamette in NWC playoff finals … Sealed team victory with 7-5, 6-4 win at No. 4 singles, after sharing 8-2 win at No. 2 doubles earlier in day … Led team in doubles victories, going 17-5 (10-0 NWC) during spring season, playing mostly at No. 2 doubles … Was 7-1 in NWC singles … Voted to All-NWC Second Team … Played big role in Whitman’s 5-4 win over ninth-ranked Trinity (Texas), winning in straight sets at No. 4 singles after contributing to team point at No. 2 doubles … Also posted two wins against No. 15 Bowdoin … Tallied Whitman’s only team point against seventh-ranked Kenyon with three-set win at No. 4 singles … Made his best showing at regional ITA fall tournament in doubles, where he and doubles partner Etienne Moshevich dropped 9-8 (8-6) semifinal to Whitman teammates.

Freshman season (2009-10) – Earned All-Northwest Conference First-Team honors in first spring season … Scored clinching fifth team point with 6-4, 6-3 victory at No. 2 singles as Whitman beat Willamette 5-1 in championship finals of NWC playoffs … Helped set stage for that team triumph by sharing in 8-5 win at No. 3 doubles … Posted NWC records of 8-1 in singles, playing mostly at No. 2, and 10-1 in doubles, playing mostly at No. 3 … Advanced to singles and doubles finals of ITA’s Pacific Northwest fall tournament … Lost 3-6, 6-0, 6-2 to teammate Matt Solomon in singles final … Visibly exhausted after that match — his ninth in less than three days — Tolman returned to court one hour later for doubles final; he and Solomon lost 6-3, 7-5.